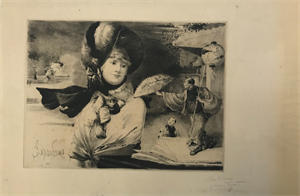 The Western European fascination with all aspects of Japanese art and culture, or japonisme, emerged in the wake of Commodore Matthew Perryâs forcible opening of Japan to foreign trade in 1854. By the 1880s, shiploads of Japanese goods, including paper lanterns, fans, and â especially influential for artists â ukiyo-e woodcuts, had poured into France. Somm spent two years studying the Japanese language after moving to Paris in the 1860s, where he became part of the Le Chat Noir circle that included Edgar Degas, Henri Fantin-Latour, ThÃ©ophile Steinlen, and Adolphe Willette. Like those artists, Somm frequently included scenes from contemporary urban life in his prints, such as the elegant Parisienne in the center of this composition.

Your current search criteria is: Portfolio is "Prints" and [Objects]Country is "France" and [Objects]Display Artist is "Henry Somm".