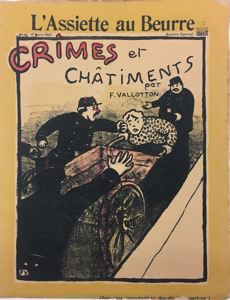 
"L'Assiette au Buerre" (The Butter Dish), a satirical magazine that offered biting commentary on modern French politics and society, appeared weekly between 1901 and 1912. Printed double-sided on inexpensive paper, each issue typically cost a mere 25 centimes. This special issue of the magazine, which featured 23 lithographs by Vallotton, was priced at 50 centimes. Each lithograph appeared on a single sheet of perforated paper that could be detached to form an independent print.

Depicted on the cover of the magazine is a working-class person that is the victim of police brutality. Vallotton, like other French anarchists of the time, wanted to spread their call for a revolution publicly, and the only print method that allowed for inexpensive mass production was the lithograph. However this was among the last lithographic collections that were produced by Vallotton. Slightly before the magazineâs publication, Vallotton married a wealthy Parisian widow, which elevated him from the lower class to the upper class. From then, until his death, Vallotton abandoned his anarchist roots and transitioned his interests to woodcuts and photographic based painting, which demonstrate his newly found fortune and ability to experiment.

Male artists
books
Items comprising a collection of leaves of paper, parchment, wood, stiffened textile, ivory, metal tablets, or other flat material, that are blank, written on, or printed, and are strung or bound together in a volume.
public domain
Land owned and controlled by the state or federal government. Also, the status of publications, products, and processes that are not protected under patent or copyright.
black and white
Portfolio List