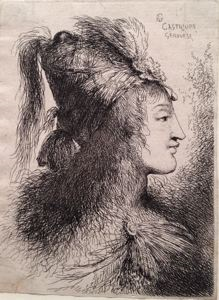 [Young Man in a Plumed Turban]

It is not entirely clear whether the androgynous figure in this etching by painter, printmaker, and draughtsman Giovanni Benedetto Castiglione is male or female; it formed part of a series of studies of heads of men (and some women) in what was then considered âOrientalâ costume, and is signed at the upper right with the artistâs monogram and âCastiglione Genovese.â Castiglione, who was influenced by both Peter Paul Rubens and Rembrandt, executed some sixty etchings during his lifetime, which are marked by a lively, free handling of line. He is also frequently credited with the development of the monotype printing process.


Keywords Click a term to view the records with the same keyword
Print
black and white
Portfolio List Click a portfolio name to view all the objects in that portfolio
This object is a member of the following portfolios: