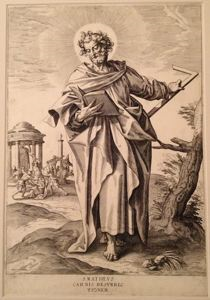 This large print formed part of a series depicting Christ and the twelve Apostles. Saint Matthew reads from a book head in his right hand, while he holds a carpenterâs square in his left. In the background, a group of armed men assaults a man lying on the ground before a round temple that contains a pagan statue; this may refer to the legend of Matthewâs martyrdom in Ethiopia.

The print is inscribed at the lower left âMartin de Vos inven[it], and in the center âAdria Collaert sculp[sit],â identifying de Vos as the designer and Collaert as the engraver. Below the border of the image appears âS. MATHEUS / CARNIS RESURREC / TIONEM.â


Keywords Click a term to view the records with the same keyword
Christianity
prints
religions
religious art
black and white
Portfolio List Click a portfolio name to view all the objects in that portfolio
This object is a member of the following portfolios:

Your current search criteria is: Portfolio is "Prints" and [Objects]Display Artist is "Adrien Collaert" and [Objects]Country is "Netherlands (Dutch)".