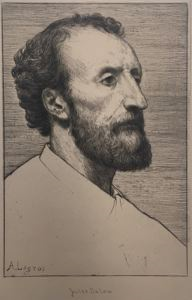 Legros, Dalou, and Rodin were old friends, having attended the Petit Ãcole du Dessin together (only Rodin would then fail to win acceptance to the more prestigious Ãcole des Beaux-Arts). Legros moved to England in 1863, where he remained for the rest of his life. He executed this striking portrait of Dalou during the latterâs English exile. Having supported the failed Paris Commune uprising of 1871, Dalou fled France and spent eight years in England before receiving amnesty in 1879.


Keywords Click a term to view the records with the same keyword
black and white
Portfolio List Click a portfolio name to view all the objects in that portfolio
This object is a member of the following portfolios:

Your current search criteria is: Portfolio is "Prints" and [Objects]Display Artist is "Alphonse Legros".