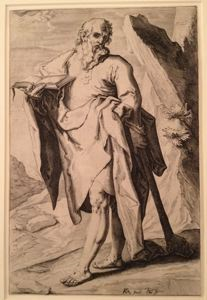 
This large print formed part of a series depicting the twelve Apostles, Jesus Christ, and Saint Paul. Saint Judas Thaddeus appears framed against a landscape background. with a large rock outcropping at the right. He holds an open book in his right hand and an irregular weapon or club in his left, which may refer to his martyrdom in Syria. The print is inscribed at the bottom with the monogram of artist Karel van Mander followed by âInve[nit], then the monogram of De Gheyn followed by âFe[cit],â indicating that De Gheyn engraved the plate after a design by van Mander. This example of the print has been trimmed slightly below the image; other editions have âCARNIS RESURRECTIONEMâ inscribed below the border.

Your current search criteria is: Portfolio is "Prints" and [Objects]Display Artist is "Jacob De Gheyn II".