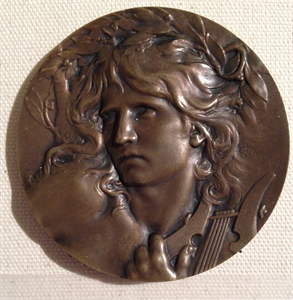 Head of Orpheus with Lyre

The tragic figure of the musician and poet Orpheus appears on the obverse of this medal, looking off to the viewerâs left with a tormented expression. A crown of laurels adorns his long hair, and he holds his lyre to his bare chest. On the medalâs reverse, the winged, nude figure of a muse sits atop a blank planchette (a space for a separate inscription), holding a quill pen in one hand and a trumpet in the other. A violin appears below the planchette. Coudray produced this medal for the Paris Mint, as part of a series of medals by prominent artists that were sold at the International Exhibition in 1900.