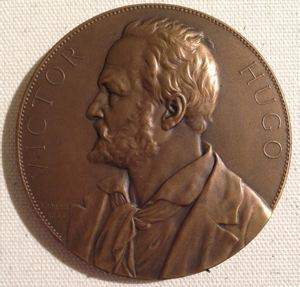 
French Romantic poet, author and dramatist Victor Hugo (1802-1885) appears on the obverse of this medal looking to the left; with his furrowed brow, loosened cravat, and gently rumpled coat, his appearance hearkens to the 19th-century Romantic ideal of the artist. The medallist Alfred Borrel included his signature and the date 1884 at the lower left. On the reverse, a palm of honor and a starburst emanating light appears beside NÃ Ã BESANÃON DOUES LE 26 FEVRIER 1802, commemorating Hugoâs birth on February 26, 1802 in BesanÃ§on. Hugo would die just a year after this medal was cast. He was buried with full state honors in the PanthÃ©on in Paris, in a crypt shared with fellow authors Alexandre Dumas and Ãmile Zola.

Your current search criteria is: Portfolio is "Coins and Numismatics".