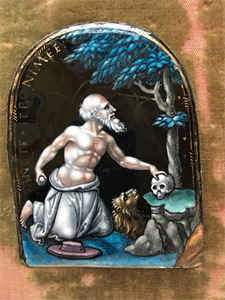 
In order to create enamel, artists apply vitreous pastes colored with metallic oxides to a metal surface and fire them to produce a material that is both attractive and exceptionally durable. The sophisticated cloisonnÃ© and champlevÃ© enamels produced in the Byzantine Empire during the 7th-12th centuries CE formed the basis of the Western enamel tradition. By the mid-15th century, artists in Limoges in southwestern France had developed a new technique for painting enamel onto copper; this allowed them to create works of greater pictorial complexity than ever before, effectively treating the metal surface like a small canvas. By the 16th century, small enamels featuring devotional subjects, often copied from prints, were very popular. In this example, Saint Jerome is shown as an ascetic penitent, stripped to the waist and kneeling before a crucifix (only faintly visible now behind the tree). The cardinalâs hat in the foreground indicates his status as one of the Doctors of the Catholic Church.

Your current search criteria is: Portfolio is "Paintings" and [Objects]Object Type is "Miniature painting".