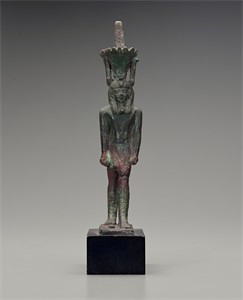 The material of the statuette is bronze, a substance fairly abundant within the Middle East during the Late Period. Bronze was not limited to only elite purchase, as it was produced from an inexpensive and abundantly available resource. The Egyptians executed many of their pieces using copper alloys, including bronze. However, statues of gods were typically produced from gold and silver, materials identified by myth as their skin and bones.

Although it is not specified what type of ritual this statuette was used for, inferences from similar figurines produced during the Late Period (664-332 B.C.E.) can provide contextual clues to what an object this size and stature would typically be involved with. This statuette was most likely not created for pure aesthetic or viewing purposes, but built with the functional purpose of a ritual object. The small scale of the figure also supports the theory of the figure's use as a ritual object as, the statuette is portable, light-weight and can be easily handled by a single person.

According to ancient Egyptian mythology, Nefer-tem came to existence from a blue lotus bud that came from the waters of Nun in the beginning of time. Each day Nefer-tem experiences a repeating cycle starting with being born at sunset, becoming the god Atum during the daytime and dying at sunset to be reborn again the next day. The lotus flowers Nefer-tem originated from contained real-world medicinal properties,and Nefer-tem was described bringing lotus flowers for the god Ra to help with his pain. Ancient Egyptians would also carry small statuettes of of the good as protective amulets.

Your current search criteria is: Portfolio is "The Yale University Art Gallery" and [Objects]Period is ".