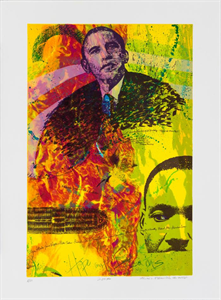 Black Art Fund
FUAM's Black Art Fund is a fundraising initiative to support the acquisition of artwork by contemporary Black artists, to address a major gap in the museumâs permanent collection. The museum is accepts both financial contributions to this fund to be used for purchases of artwork as well as donations of museum quality artworks to achieve greater representation and recognition of non-white artists and artworks.
Male artists
prints
Pictorial works produced by transferring images by means of a matrix such as a plate, block, or screen, using any of various printing processes. When emphasizing the individual printed image, use "impressions." Avoid the controversial expression "original prints," except in reference to discussions of the expression's use. If prints are neither "reproductive prints" nor "popular prints," use the simple term "prints." With regard to photographs, prefer "photographic prints"; for types of reproductions of technical drawings and documents, see terms found under "reprographic copies."
Black artists
BIPOC artists
Portfolio List