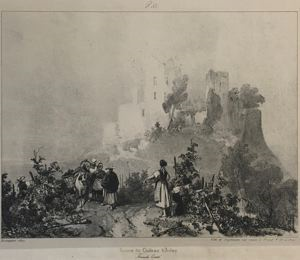 
From Baron Taylor's Voyages pittoresques et romantiques dans l'ancienne France, vol. 2. A painter of Romantic landscapes, Bonington spent much of his short life in France and was one of the few English artists to contribute to the Voyages pittoresques et romantiques dans l'ancienne France. He made this lithograph, depicting a castle in the region of Franche-ComtÃ© near the eastern border, after one of Baron Taylorâs own drawings. The printer, Engelmann, developed a special wash technique that allowed him to reproduce Boningtonâs subtle tonal effects, such as the fog wreathing the ruins.

Beneath the image, the artist is identified at lower left ("Bonington 1827") and the printer at lower right ("Lith[ographie] de Englemann rue Louis le Grand No. 27 a Paris").

landscapes
France
Europe
Male artists
prints
Pictorial works produced by transferring images by means of a matrix such as a plate, block, or screen, using any of various printing processes. When emphasizing the individual printed image, use "impressions." Avoid the controversial expression "original prints," except in reference to discussions of the expression's use. If prints are neither "reproductive prints" nor "popular prints," use the simple term "prints." With regard to photographs, prefer "photographic prints"; for types of reproductions of technical drawings and documents, see terms found under "reprographic copies."
architecture
Structures or parts of structures that are the result of conscious construction, are of practical use, are relatively stable and permanent, and are of a size and scale appropriate for--but not limited to--habitable buildings. Works of architecture are manifestations of the built environment that is typically classified as fine art, meaning it is generally considered to have aesthetic value, was designed by an architect (whether or not his or her name is known), and constructed with skilled labor. For the art or science of designing and building structures, use "architecture (discipline)."
public domain
Land owned and controlled by the state or federal government. Also, the status of publications, products, and processes that are not protected under patent or copyright.
ruins
black and white
nineteenth century
Century in the proleptic Gregorian calendar including the years 1800 to 1899 (or 1801 to 1900).
Portfolio List