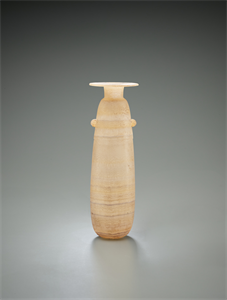 This vessel is made out of a material known as aragonite, which most likely derives from seashells or white coral, giving it an off-white color marked by horizontal rings around the entire body of the piece. It is cylindrical in shape, with a wide, flat rim and a narrow neck, smooth polished sides and a rounded bottom. Towards the top of the vessel, there are what appears to be small, rounded projects that look to be miniature handles, and may have been used for decorative purposes.

This vessel was said to have been used for holding cosmetics, but oftentimes it held perfumed oils. Perfumes in ancient Egypt were seen as a luxury because they often consisted of imported exotic raw materials. Some perfumes were sacred, some were used in the home daily, some were used for ritual purposes, and others played a role in the mummification process.

In The Decorated Body in Ancient Egypt: Hairstyles, Cosmetics, and Tattoos it was said, âEgyptâs many perfumes were renowned throughout the ancient world for their quality, and were regarded as a high status commodityâ (Fletcher et al. 8). This led me to believe that the alabastron would have been owned and used by elites within the society.

According to William Zimmerle, it is also evident that members of the religious sector would have had an alabastron to hold oils for rituals and ceremonies. It was fascinating to see, based on its usual contents, how the alabastron can be found in such diverse settings such as a home or a tomb.

While there are no other markers on the outside of this object, the vesselâs overall construction helped archaeologists determine its functional purpose for carrying and containing oils. Constructing these vessels out of high-quality materials such as aragonite, allowed for these substances to keep cool in the Egyptian climate (Grzymski 124).


Keywords Click a term to view the records with the same keyword
Middle East
Theme: Images for Eternity - Paqua
Vessel
Africa
on loan
Egypt
7th century BCE
6th century BCE
Arragonite
African
Ancient Egypt
Egyptian
Portfolio List Click a portfolio name to view all the objects in that portfolio
This object is a member of the following portfolios: