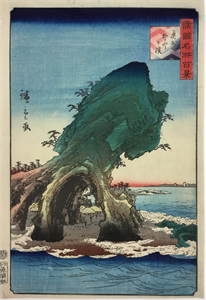 
The artist known as Hiroshige II (born Suzuki Chinpei, and later known as Shigenobu) took this title upon the death of his master and father-in-law, the more famous Utagawa Hiroshige, in 1858. Only relatively recently have scholars learned to distinguish between his work and the earlier Hiroshige, as Hiroshige II imitated his masterâs style and subjects. Hiroshige, for example, was well known for a series of prints entitled One Hundred Famous Views of Edo; Hiroshige II, in turn, produced a series entitled One Hundred Famous Views in the Various Provinces. This print formed part of this series. It depicts part of the coastline on the northern tip of the main Japanese island of Honshu, today in Aomori Prefecture.

landscapes
Japanese
Japan
Asian artists
Male artists
Asia
Ukiyo-e
Distinctive genre in painting and other media, but most prominently in woodblock printing. It arose in the Edo period (1600-1868) and built up a broad popular market among the middle classes. Subject matter typically focused on brothel districts and kabuki theatres, with formats ranging from single sheet prints to book illustrations. Generally, the style is characterized by a mixture of the realistic narrative of the Kamakura period and the mature decorative style of the Momoyama and Edo periods. Distinctive styles and specialties in subject matter were developed by different schools throughout the period.
Japanese printmaking styles
Printmaking styles belonging to Japanese cultures.
Japanese painting styles
Painting styles belonging to Japanese culture.
Hiroshige II
Honshu
Aomori
series
Portfolio List