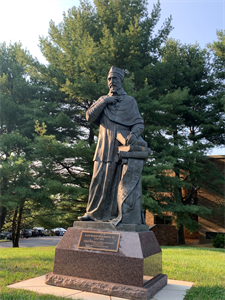 
Upon its founding in 1942, the universityâs name was âFairfield University of Saint Robert Bellarmine, S.J.â Although Robert Bellarmineâs name is no longer included, he remains the universityâs patron saint. Born Roberto Francesco Romolo Bellarmino in 1542, he became a member of the Order of the Society of Jesus in 1560, and gained renown as a professor of theology. Pope Clement VIII made him a cardinal in 1599, writing that âthe Church of God had not his equal in learning.â
However, Bellarmineâs life was not without controversy. As counselor to Pope Paul V in the early 17th century, he was involved in the early proceedings against Galileo Galilei as well as the trial of Giordano Bruno. He died in Rome in 1621, and his subsequent reputation was based on his prolific published works of theology. Dressed in a cardinalâs robes, Bellarmine rests his hand on books which bear the titles of his own work; draping the pedestal underneath them is a banner bearing his name and the symbol of the Jesuit Order, the letters IHS, taken from the first three letters of Jesusâ name in Greek. Although the process to seek his canonization began just a year after his death, it was completed only in 1930.

For more information about this piece, as well as the other sculpture that you can find around the Fairfield University campus, see our Outdoor Sculpture Audio Guide on Cuseum here.