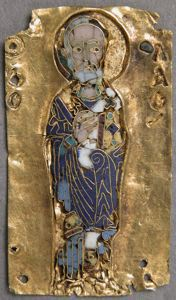 St. Nicholas, fourth-century Bishop of Myra (Turkey), is the patron saint of children, sailors, prisoners awaiting execution, and endangered travelers. On the medallion, he is giving a sign of blessing. Byzantine goldsmiths developed tools and a precise technique to create some of the finest enamels. CloisonnÃ© enamels are made by filling small cells formed by gold wire, called cloisons, with glass powder and firing in a kiln. Here, St. Nicholas is made from eight distinct colors â ten colors are the maximum seen in one enameled image in this period. Unlike other medallions that would have been worn around the neck, the drilled holes show that this would have been fastened to the cover of a religious book, framing a central icon image. It was probably created in a monastery in the country of Georgia.


Keywords Click a term to view the records with the same keyword
Byzantium
Christianity
Religious Art
Portfolio List Click a portfolio name to view all the objects in that portfolio
This object is a member of the following portfolios:

Your current search criteria is: Keyword is "DL".