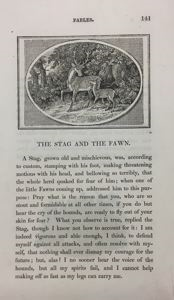 "The Stag and the Fawn," from The Fables of Aesop

The Fables of Aesop, and others


The text of this fable reads:

"A Stag, grown old and mischievous, was, according to custom, stamping with his foot, making threatening motions with his head, and bellowing so terribly, that the whole herd quaked for fear of him; when one of the little Fawns coming up, addressed him to this purpose: Pray what is the reason that you, who are so stout and formidable at all other times, if you do but hear the cry of the hounds, are ready to fly out of your skin for fear? What you observe is true, replied the Stag, though I know not how to account for it: I am indeed vigorous and able enough, I think, to defend myself against all attacks, and often resolve with myself, that nothing shall ever dismay my courage for the future; but, alas! I no sooner hear the voice of the hounds, but all my spirits fail, and I cannot help making off as fast as my legs can carry me.


APPLICATION.
Try what we can, do what we will,
Yet nature will be nature still.
The predominance of nature will generally shew itself through all the disguises which artful men endeavour to throw over it. Cowardice particularly gives us but the more suspicion of its existence, when it would conceal itself under an affected fierceness, as they who would smother an ill smell by a cloud of perfume, are imagined to be but the more offensive. When we have done all, nature will remain what she was, and shew herself whenever she is called upon: therefore, whatever we do in contradiction to her laws, is so forced and affected, that it must needs expose and make us truly ridiculous."

Your current search criteria is: Keyword is "HQ".