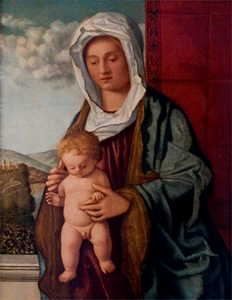 
Paintings of the Madonna and Child, alone or with saints, were immensely popular in Venice in the 15th and 16th centuries. Most of the paintings by Ingannati (who was likely born in the Veneto region around the city of Venice), fall into this category. His works demonstrate the influence of Giovanni Bellini (ca. 1435-1516), the most important artist working in Venice at the end of the 15th century. Belliniâs luminous works, which took full advantage of the relatively new technique of oil painting, exemplify the style of Renaissance Venice in their brilliant colors, poetic expression, and softer forms and figures. Ingannati likely trained with Bellini in the early 16th century and continued working in a similar style throughout his career; his paintings often reuse or modify Belliniâs compositions, reworking figures to create seemingly original and innovative works.

Male artists
religious art
paintings
Unique works in which images are formed primarily by the direct application of pigments suspended in oil, water, egg yolk, molten wax, or other liquid, arranged in masses of color, onto a generally two-dimensional surface.
Virgin and Child
women
public domain
Land owned and controlled by the state or federal government. Also, the status of publications, products, and processes that are not protected under patent or copyright.
religious imagery
Christianity
Refers to the world religion and culture that developed in the first century CE, driven by the teachings of Jesus Christ of Nazareth. Its roots are in the Judaic tradition and the Old Testament. The tenets include a belief in the death and redemptive resurrection of Jesus. The religion incorporates a tradition of faith, ritual, and a form of church authority or leadership.
children
People in the earliest developmental stage of life.
Portfolio List