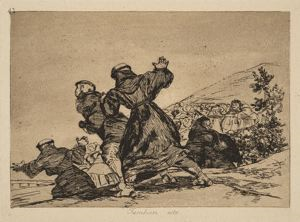 The Disasters of War: This Too


Plate 43 from the series The Disasters of War. Between 1810 and 1820, Goya executed more than eighty etchings that captured the horror and brutality of the Napoleonic wars in Spain, but the politically sensitive plates remained unpublished for decades after the artistâs death. In 1863, they were published by the Real Academia de Bellas Artes de San Fernando in Madrid. The title of this etching, This Too, continues on from the title of the preceding Plate 42, Everything Is Topsy-Turvy.