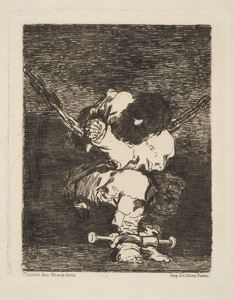 Security as barbaric as crime


This etching formed part of a group of three plates in which Goya depicted bound prisoners. Like the Disasters of War series, this plate was not printed during Goyaâs lifetime. The plate ultimately found its way to Paris, where it was published in the Gazette des Beaux-Arts in 1867.

Your current search criteria is: Keyword is "UW" and [Objects]Display Artist is "Francisco de Goya".