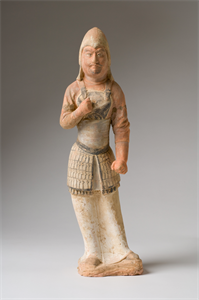 
This figure, in buff clay, boasts highly detailed painted armor, intended to replicate contemporary design. Straps secure the breastplates over the shoulders of the soldier, who wears a short split skirt with a âkeyâ design. His simulated leather hat has a back flap, designed to protect his neck from the hot sun of arid Western China. His demeanor is stern but restrained, in contrast to the more fierce expressions of later Tang guards. The soldier stands in a natural pose, with his weight shifted to one leg. His hands likely would have originally held a weapon or banner. Military figurines appear in fewer numbers in Tang tombs compared with the preceding periods of disunion, although a wealthy person might have had his own military group.

China
Asian artists
funerary art
soldiers
statues
statues
Sculpture in the round, usually but not always depicting humans, animals, mythical beings, or small figure groups. Statues are relatively large in scale, being life-size, larger than life-size, or only slightly smaller than life-size. For small-scale representations of humans, animals, or mythical beings, use "figurines," "statuettes," or another appropriate term. For depictions of humans, animals, or mythical beings in media other than sculpture, use "figures (representations)."
public domain
Land owned and controlled by the state or federal government. Also, the status of publications, products, and processes that are not protected under patent or copyright.
earthenware
Tang Dynasty
Additional Images