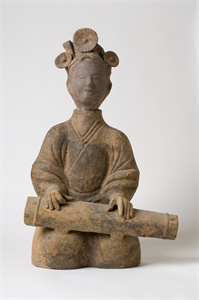 
This seated female figure holds a seven-stringed musical instrument called the qin, or zither. Made of lacquered wood, the qin was designed to be plucked rather than strummed. First played for entertainment, as this figure does, this instrument was later favored by scholar officials and ranked among the âfour great accomplishmentsâ of gentlemen, along with painting, calligraphy, and chess. Actual musical instruments have been excavated from Han Dynasty tombs, indicating that music played a central role in the afterlife. The inclusion of replicas of such objects in burial tombs, then, was an indication of great wealth, learning, and taste. This figure originally would have formed part of a group, the gestures and poses of which would have related subtly to one another.

China
Asian artists
funerary art
music
musical instruments
statues
statues
Sculpture in the round, usually but not always depicting humans, animals, mythical beings, or small figure groups. Statues are relatively large in scale, being life-size, larger than life-size, or only slightly smaller than life-size. For small-scale representations of humans, animals, or mythical beings, use "figurines," "statuettes," or another appropriate term. For depictions of humans, animals, or mythical beings in media other than sculpture, use "figures (representations)."
public domain
Land owned and controlled by the state or federal government. Also, the status of publications, products, and processes that are not protected under patent or copyright.
earthenware
Additional Images