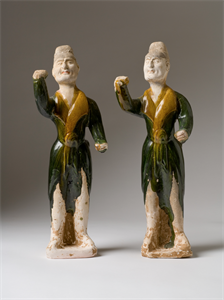 
Each groom stands with his right arm raised, as if holding reins. Their lapelled cloaks (glazed in amber and green), and trousers and high boots, mark them as Persians. The figuresâ unglazed heads retain discernable traces of their facial features, which were painted directly onto the surface of the earthenware pottery body. Like their costumes, these painted details further underline their foreignness, since the grooms; noses as well as their eyes have a distinctively âWesternâ appearance. The historical explanation for this is simple: Central Asian grooms (who were more experienced horsemen than the Chinese) managed the horses of the Tang elite, and thus were a familiar sight in Changâan, the capital under this dynasty. Figures such as these suggest that the deceased was wealth enough to have kept stables with imported horses and grooms, or at least aspired to have done so. Not exclusively for military use, horses were ridden by both male and female aristocrats in Tang China, and polo â another import from the West â was a favorite pastime for both men and women.

China
Asian artists
funerary art
statues
statues
Sculpture in the round, usually but not always depicting humans, animals, mythical beings, or small figure groups. Statues are relatively large in scale, being life-size, larger than life-size, or only slightly smaller than life-size. For small-scale representations of humans, animals, or mythical beings, use "figurines," "statuettes," or another appropriate term. For depictions of humans, animals, or mythical beings in media other than sculpture, use "figures (representations)."
public domain
Land owned and controlled by the state or federal government. Also, the status of publications, products, and processes that are not protected under patent or copyright.
earthenware
Tang Dynasty
sculpture
Three-dimensional works of art in which images and forms are produced in relief, in intaglio, or in the round. The term refers particularly to art works created by carving or engraving a hard material, by molding or casting a malleable material (which usually then hardens), or by assembling parts to create a three-dimensional object. It is typically used to refer to large or medium-sized objects made of stone, wood, bronze, or another metal. Small objects are typically referred to as "carvings" or another appropriate term. "Sculpture" refers to works that represent tangible beings, objects, or groups of objects, or are abstract works that have defined edges and boundaries and can be measured. As three-dimensional works become more diffused in space or time, or less tangible, use appropriate specific terms, such as "mail art" or "environmental art."
Additional Images