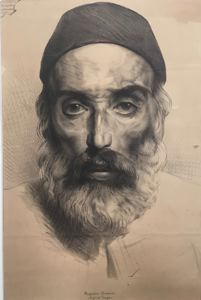 A Jew of Tangier


Benjamin Constant was a member of the Society of French Orientalist Painters. Founded in 1894, the group's mission was to encourage artists to travel to the Middle East and North Africa (Benjamin Constant had visited Morocco in 1872) and to promote work that took up Orientalist themes. At the time, the term had no negative connotation, but today "Orientalism" is used to describe the set of Western attitudes towards the perceived exoticism of non-white, non-Christian cultures that resulted in depictions that were exaggerated, romanticized, or patronizing.

France
Europe
Male artists
portraits
prints
Pictorial works produced by transferring images by means of a matrix such as a plate, block, or screen, using any of various printing processes. When emphasizing the individual printed image, use "impressions." Avoid the controversial expression "original prints," except in reference to discussions of the expression's use. If prints are neither "reproductive prints" nor "popular prints," use the simple term "prints." With regard to photographs, prefer "photographic prints"; for types of reproductions of technical drawings and documents, see terms found under "reprographic copies."
public domain
Land owned and controlled by the state or federal government. Also, the status of publications, products, and processes that are not protected under patent or copyright.
men
black and white
nineteenth century
Century in the proleptic Gregorian calendar including the years 1800 to 1899 (or 1801 to 1900).
Portfolio List