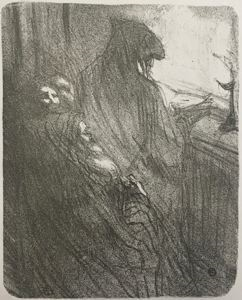 The Prayer of the Polish Jews


From the book Foot of the Sinai Deluxe edition printed in 1897, regular editions in 1898.

The decade-long Dreyfus Affair laid bare the anti-Semitism latent within the society of the Third Republic. Alfred Dreyfus, an army officer who was Jewish, was twice convicted of treason and sentenced to hard labor before his vindication in 1906. The scandal divided the nation into âDreyfusardsâ (among them Ãmile Zola, Claude Monet, and Camille Pissarro) and âanti-Dreyfusardsâ (including Edgar Degas, Paul CÃ©zanne, Pierre-Auguste Renoir, and Adolphe Willette). Others, like Rodin and Toulouse-Lautrec, attempted to maintain a sort of public neutrality on the issue. This lithograph was part of a set of illustrations for a book by the politician and journalist Georges Clemenceau, one of the most vocal Dreyfusards and a future prime minister of France.