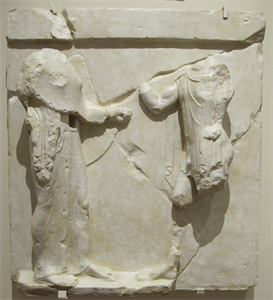 
from "Highlights of the Plaster Cast Collection" published by the BMA 11/10 in conjunction with the exhibition, Gift from Athens, p. 4-5

The Athenian Treasury was located below the Temple of Apollo on the Sacred Way in Delphi. It was built as a Doric structure around 490 BCE; a time of transition from the Late Archaic to the Early Classical period in Greek Art.

This Treasury, which was just one of many such structures at Delphi, functioned on several levels. It was, for example, a votive offering, dedicated to Apollo and the Delphic Oracle in recompense for their perceived help in defeating the Persians. On a more prosaic level, the structure functioned as a repository for rich gifts left by worshipers, in addition to providing an important, visually compelling, place to display war booty.

The metopes of the Treasury depict some of the Labors of Herakles as well as the Deeds of Theseus. On the south side, for example, Theseus confronts various monsters and barbarians, including a Minotaur and an Amazon; both frequent metaphors for the Persian enemy, whose defeat by the Athenians is celebrated in the sculptural program.

The metope represented here shows a meeting between Athena (on the left) and Theseus (on the right). The goddess bestows her blessing upon the Athenian hero, thus emphasizing the special relationship and protection she offers him and, by extension, the entire city of Athens. Theseus stands quietly, unlike the other metopes in which he battles mythological beasts or uncivilized foes.